Day 4 - Drive from Hope to Kamloops

Today we drove from Hope to Kamloops with one or two stops on the way. The non-stop version should take 3 hrs 45 min, our version saw us spend 8 hrs on the road, visiting touristy stuff and photographing trains.

This leg sees us driving along the stunning Fraser Canyon - did I say stunning ? Pffft - it would take a literary genius to describe the scenery here. As well as trees, rocks and water, there's the added bonus of deer running along the side of the road and staying vigilant for beers.

We drove through multiple road tunnels and stopped at various places to take scenic photos. 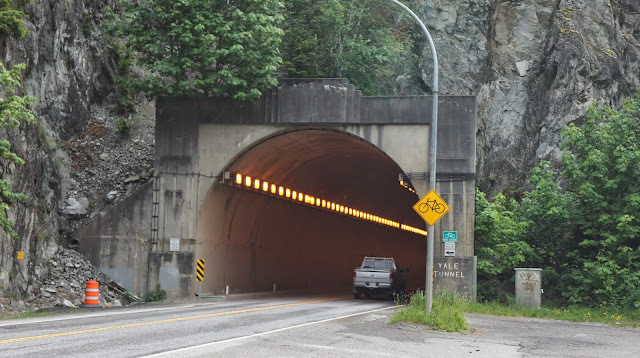 Being a public holiday once again, there wasn't much plying the rails, but we were lucky enough to catch a few trains, thanks to the guys accosting a few railroad employees and forcing information out of them.

The first serious stop was at Williamsons Bridge, where I suggested to the guys they could walk the length of it and I'd go pick them up at the other end - we were 1/3 of the way across already. Just as we got there we heard a train running in the trees far below, but were too late to photograph it.

Once we departed we saw a distant light and high tailed it back to an area where it was conducive to good photography. There happened to be a CN guy there and he said if we wait 10 minutes another one would turn up. No brainer really.

On the road again and we came across Hell's Gate, which we spent far too long at but it was well worth it - a ride in a gondola across the narrowest part of the canyon where "it is said" the volume of water passing through is greater than the Niagara Falls. The water depth is about 110 feet and the noise is deafening. At the gift shop I told the girl there that we call Pinnoche Fudge Russian Fudge and she just gasped - never heard of it. I had to purchase some to confirm that it was the correct stuff....
Lawrie and I high tailed it across the suspension bridge and climbed a steep track to the railroad tunnel, in the hope that...naaaa - why bother... no trains.


Onwards and upwards - this time to Boston Bar - commenting constantly on the scenery. Spring time is awesome here - new growth on the trees really greens the place up.
I suggested that since Boston Bar is a crew change point and that today is a public holiday, there's a chance that a train may have been stopped here and been abandoned - and so it was. Two of them in fact - one on each side of the river. This location turned out to be a real gem - I filmed a CN mixed freight, a CP coal train, a CN intermodal and the Rocky Mountaineer - bonus. The coal train, despite it's unvariety of rolling stock, turned out to be a bonus in that it had been split in two and was occupying two of the storage tracks here. A truck turned up, crew were dropped off and then they built up the train and took off.

I then called in to Ashcroft to talk to Randolph who is the owner of the Ashcroft Apartments and Suites to confirm our booking on the return leg. He's a cool guy.

We saw a train at Ashcroft but we needed to get on the road. Weather was wet through to Savona and cleared up and was warm and sunny at Kamloops, where we arrived at 5:30 pm - enough daylight left to check out some locations.

Lawri'e tummy was threatening violence if it didn't get fed so he was hinting at a 7pm curfew to knock it off and go get dinner. Just as 7:02 ticked over, both Grant and I said "What's that noise ?" and a train appeared around the corner. It then stopped for a crew change and then departed - this of course took at least 30 minutes. The upside is that this one had 200 freight cars on it - 200 on the dot. It was made up of containers and a huge string of empty grain cars (covered hoppers).
By now Lawrie was fizzing, and the look on his face when I said - "Oh man, there's another one coming". We stayed for that one and just as we were packing - someone tapped me on the shoulder, and across the lake they pointed out a very very long train. It was the CP Canpotex empties from Vancouver passing through. It had 150 odd in the consist, which we confirmed by driving into town and counting the darned things.

Note for spotters. The second unit on the second train was CN 2455, which is an ex LMS lease unit painted entirely blue but has the CN logo on the side - it's one of the Blue Devil locos and are very rare to see. I am a winner !!!


It was finally time to find something to eat and downtown Kamloops didn't have much to offer - until we came across a Mongolian Restaurant - the same type that's in Palmy and is very popular. Amazing to think that we could walk in off the street and get a feed. The other three hadn't had Mongolian style before and it was obvious from their grins they weren't too sure about what was in store for them. They thanked me for that afterwards.
A wee walk up the suspension bridge in downtown Kamloops to burn off dinner and we called it quits.
Tomorrow we spend the entire day at Kamloops, where we have been assured that things will be busy owing to the backlog caused by the National Holiday.
Posted by Erin at 23:26