Finally made it to Vancouver.

No glitches at all. The 777-200 V2 layout is really good - the Economy seats are actually pretty good now.

About 9 overseas flights turned up at Vancouver at the same time so getting through Customs took a long time, and 100 questions later, I was finally admitted into Peoples Democratic Republic of Canada !!

Picking up the Hertz car was a breeze and that went really smooth...."Oh, I used to work for Hertz New Zealand...." thrown in there.

Sally the satnav was soon deciphered and she got us to the Hotel without any wrong turns. 30 minutes later we were on our way to Delta to do a bit of train spotting. Upon our arrival we were immediately rewarded with a Canadian Pacific SD40 doing some switching with a string of containers. It was soon realised that the container trains were much longer than the yard and the SD40 was splitting the arrivals up into several tracks. 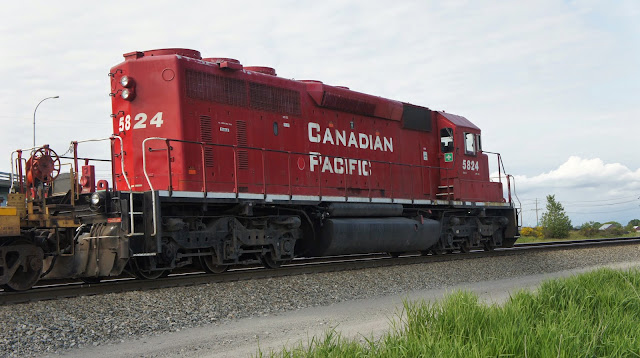 A lull in activity soon hit, and after waiting an hour, I said "as soon as we leave, something will turn up" - and as soon as we left, a Canadian National intermodal turned up and was parked up and locked on one of the inbound tracks - still running. This puppy had 146 container cars on it. 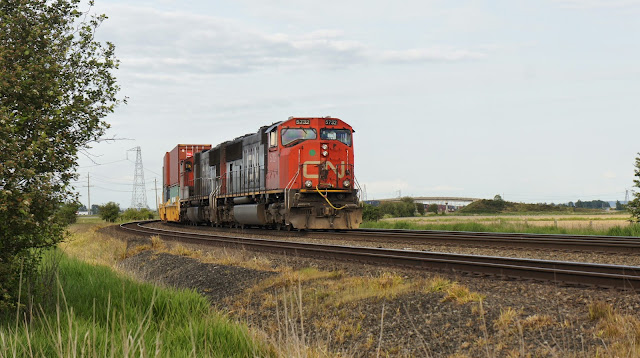 During the first attempt to count the cars, an approaching light was spotted - a quick U-turn and we were set up for the arrival of a BNSF coalie. - about 124 on this one. 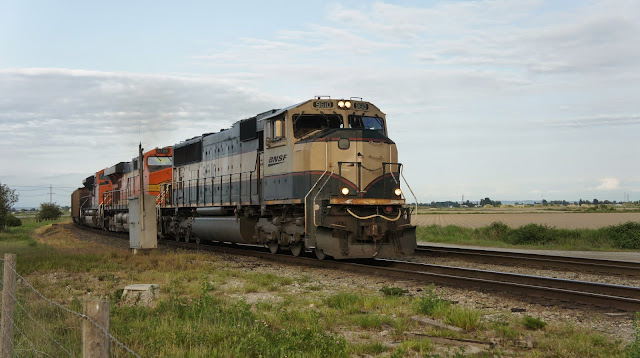 The bonus with this one was the patched BN executive colour scheme on the lead loco, which dates back to at least 1995. Considering we were all very tired, we considered it a successful afternoon out. Dinner at a dodgy Asian food court in the Lansdowne Mall in Richmond and we're all hitting the sack pretty early.

Tomorrow I take them on a wild goose hunt around Vancouver.
Posted by Erin at 21:42