This morning dawned warm and partly cloudy, and as such, a return trip to Roberts Bank at Delta was in order.
When we turned up, the original CN container train had been replaced by another that was awaiting it's turn to be taken into the port. 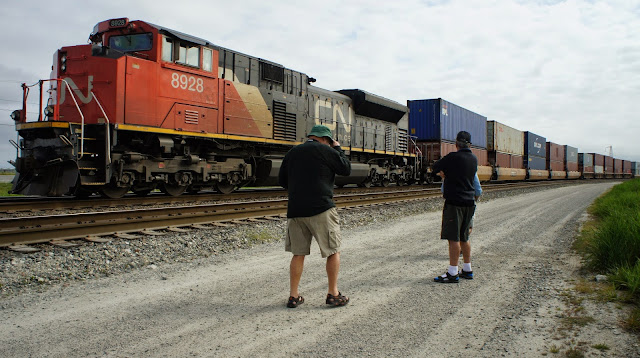 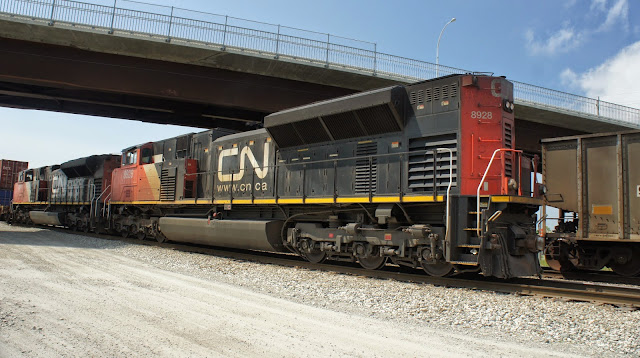 The other three were down by the loco taking in all it had to offer, when a vehicle rolled up and out jumped an engineer and a yardman.
I was 100m away setting up the video and the next thing I see is the three stooges being led up the steps into the loco cab, the loco powering up and it starts rolling.
The three of them got a ride in an SD70M-2 all the way into the port where I had to follow the train and go and pick them up.
Their grins were a mile wide. 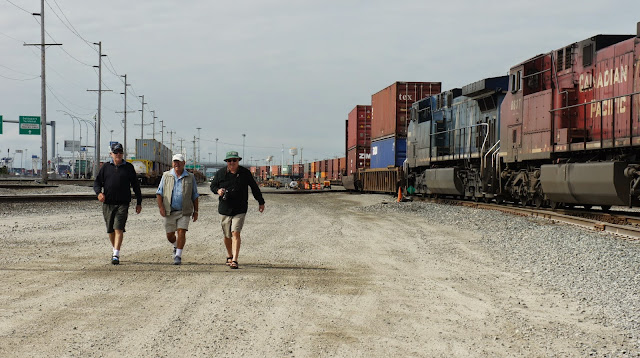 They'll be re-telling that story for years to come.

Over the next few hours we saw a few container trains coming and going as well as another BNSF coalie, most at the same time.
We returned to the hotel for a comfort stop, returned back to Delta and the action was all on again. After being told that there was nothing due in till 6pm, I decided to go and show the guys the CN yard at Surrey.
Sitting - waiting - talking - nothing, for 2 hours. Called it quits and went to the eastern end of the yard - still nothing, but heard lots of train noises across the river at New Westminster.
So we then went over the bridge to NW and espied a BNSF freight cruising through town with a load of SRY freight cars (Southern Railway of British Columbia). We managed to overshoot and photograph it, and then it dawned on me - this thing was going to the SRY Yard - a quick embarkation and we shot off to the Yard and sure enough, it turned up and stopped right beside us. Locos were disconnected and SRY locos picked up the freight and took it into the yard. The BNSF locos then pick up more freight and headed back. An awesome display. 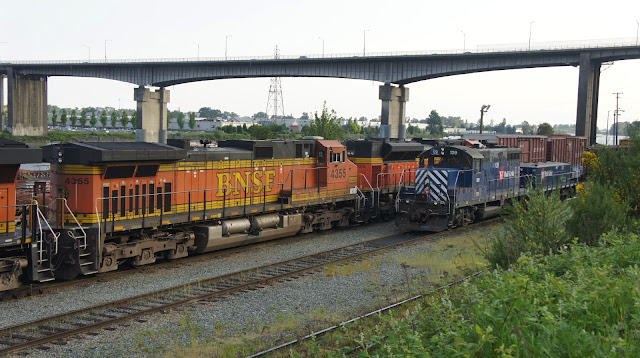 By now it was getting late - 8 pm ish - and the light was starting to fade, so one more visit was in order - the Lulu Island Swing bridge.
This was only meant to be a drive by, get a quick photo and head off. As we approached it, it was abundantly clear that there was an autorack train using the bridge right then and there - amazing. I'd read somewhere that the bridge is only rotated when a train is required to use it, so I hypothesized that once the train was across, it will most likely swing open again. And it did. Seeing a swing bridge in action is a rare treat and to turn up and witness this event without waiting is truly unique - I got it on video.

Quite a few trains seen today, a bit of waiting was endured, but overall, pretty good - considering it's Victoria weekend and everything is shut down for 3 days.

Tomorrow we drive to Hope and commence our journey along the banks of the Fraser River.
Posted by Erin at 21:10