We departed Kamloops thinking it was a pretty cool town and arrived at Revelstoke thinking this place is even better.

The drive out of Kamloops takes you along the Shuswap (shoe swap) valley and into the lake districts. The arid scenery of Kamloops is soon replaced with green trees, lakes and snow capped mountains - stunning.

Along the way we saw many trains heading west, however we were on a freeway and couldn't stop. So the first place to pull over was a small town called Chase. A coalie was parked up and a stack went through (railfan talk). The guys visited a book shop and I stood and waited....nothing.

When the coalie departed we took off and went to a little known place on Notch Hill Road. Here the track forms a horseshoe and is used by west bound trains only. The east bound trains take an alternate route. Ooops - The only trains in this area are Canadian Pacific. On one leg of the curve the tracks go under the road, on the other they go over the road on their own bridge. We waitied for ages but finally a coalie turned up. It was roaring uphill in notch 8 and only managing about 5 mph. it was a terrific show of power versus gravity.

We skipped Salmon Arm as we stay there on the return journey, so the next stop was Sicamous where we managed to catch a stack on the bridge crossing the river. 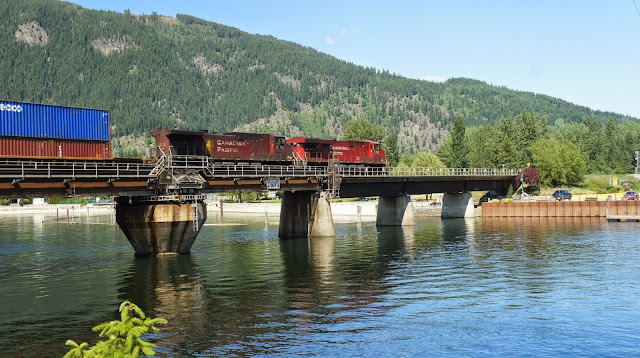 The next stop was at the site of the Last Spike - where I managed to video a train going past the memorial. 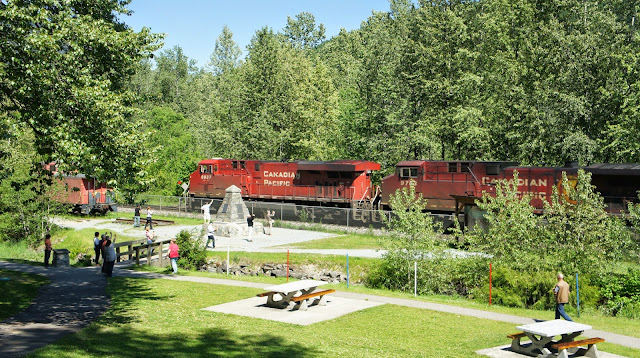 The next objective was to film a train at a small lake front just past Lake Victor near the Three valleys Resort. The sight of road works made my heart skip a beat but we got there in time, knowing full well that a train was bearing down on us pretty fast. I had no problems getting my feet wet to ensure I got the shot. What a stunningly scenic place. 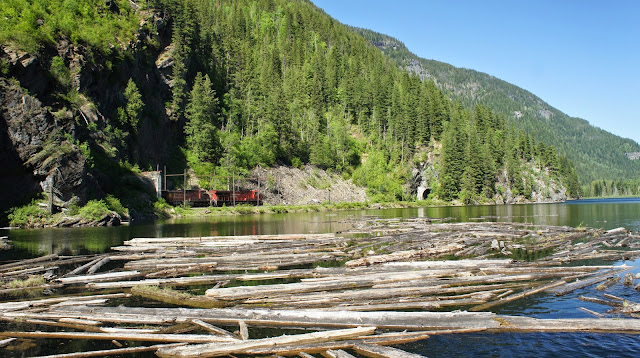 The last stop was Revelstoke. I attempted to get the guys to the Museum on time, however the train we were chasing had (what we thought at the timke) triggered the crossing lights and we were stuck there for ages. It turned out they were faulty, so I had to reverse out. Museum will be visited tomorrow.

28 degrees - another layer of sunburn - lunch at a roadside Cafe and dinner at an Italian restaurant. Excellent service, which is usually initiated by our accents. Accommodation is at the Swiss Chalet - by far the best lace we've stayed.... across the road are the railway tracks. About 6 trains filmed, but in amazing scenery.