This wee jaunt took us from the insane traffic of Calgary (and it was Sunday morning !) to the city of Lethbridge. Driving through downtown (yesterday) the buildings were blocking the satellite signal and it was amusing to see Sally the Satnav have a total fit with the map display spinning around in circles.

Not much to report for our efforts today. Usually the train radar (gut feeling) is working well but today it was on the fritz. I diverted to Okotoks to see if anything was running through - nothing to be seen or heard, and just as we were returning to HWY 2 - oh look, a train. Dammit. It was going way too fast to double back so we continued on.

With most of the guys falling asleep during this long leg that was over mostly flat ground, the radar started to kick in - ie, I needed to do No 1s and we were getting close to Fort McLeod - I chose an empty road by the tracks and as I was walking to a small tree, a light appeared in the distance. It was the long Canpotex (Canadian Potash Exporters) train - and it was our first sign of a Union Pacific unit. It was too important to film to get stills sorry. I know how bitterly disappointed you all are.

On the way through Fort McLeod, a black plume of smoke suddenly appeared - we must investigate. By the time we got there the fire service were already in attendance extinguishing a car that was totally gutted. It wasn't an old car either.

The Alberta plains are not scenic - no-one takes photos of flat land. So one has to resort to seeing beauty and artistic impression in man made features. Here's an example ..... 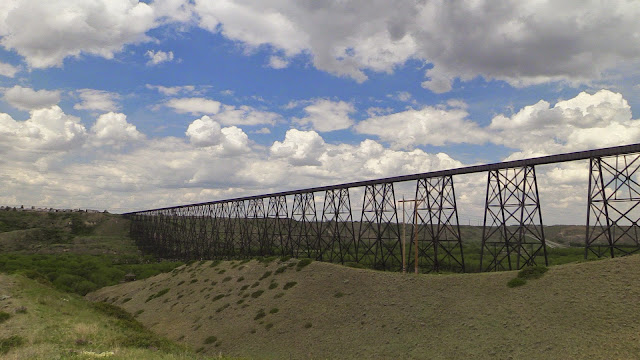 This is why we came all the way down to Lethbridge.
All these little hills have walkways that go to lookouts so you can see the bridge from differing angles.
After checking in (totally seemless) and lunch at Subway, we returned here to wait for a train. I forgot the scanner so couldn't keep tabs on what was going on in the yard at Coalhurst. I sat on the hill for about 2 hours waiting for nothing to happen.
While I was there, the guys took a walk and discovered a few things....back to that later.
I watched people jogging past, families walking together - no trains. One of the kids that went past excitedly pointed at something in the ground and squealed "there's one !!". What on earth is he excited about? Then he did it again. I was puzzled.
When I met up with the guys, they happened to mention that they saw a snake and that one was heading my way - saucer eyes time. They'd talked to a kid who said it was a gardener snake. Lovely...and here was I making a wee nest in the long grass for myself.

Anyway, the sun was shifting, but it wasn't late so I took the guys over to Coalhurst where the big yard is, and after about 30 minutes of watching and waiting, we realised that a train was departing for Lethbridge and it would pass over the bridge. The big problem was that I didn't have a plan in place for getting to the other side of the bridge for these late shots, so I didn't have a map reference for the Satnav so we had to wing it. The usual viewing place would mean we'd be looking into the sun. Several ideas were mooted but by the time Sally sent us around the block, the train was already passing over the bridge. At least we got to see it. Thankfully we have a whole day here tomorrow to repeat these stuff ups !

Can you see the mistake ? 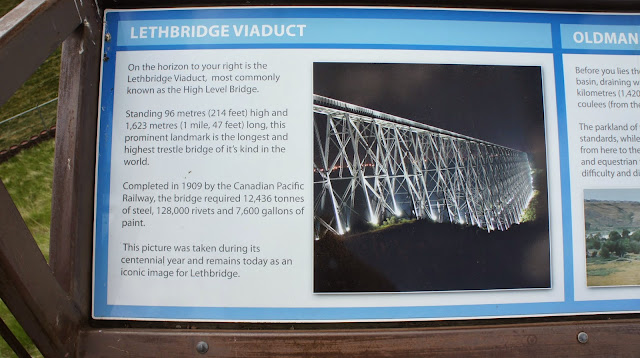 To help you out, 96 metres does not convert to 214 feet - it should be 314 feet. Not a good look when a bunch of rivet counting train spotters are reading it...

Early-ish dinner and retire. We've had some late nights and it's good to get in early. Good grief - it's almost 10 pm and it's still daylight.

Not that we should ever admit it, but we're glad that the Alberta hotels also supply body lotion....the low humidity was making my legs look white with dry skin - well that's my excuse anyway. We're skulling back water like crazy. Another sunny day in paradise.