Today was a relatively short drive from Golden to Banff. It was another day of "Look at that !!" - and for good reason.

No sooner had we left Golden and entered the Kicking Horse Canyon, Lawrie piped up and said "Bears !!", and there they were, two black bears feeding on spilled grain on the railway tracks, barely 50 metres away. 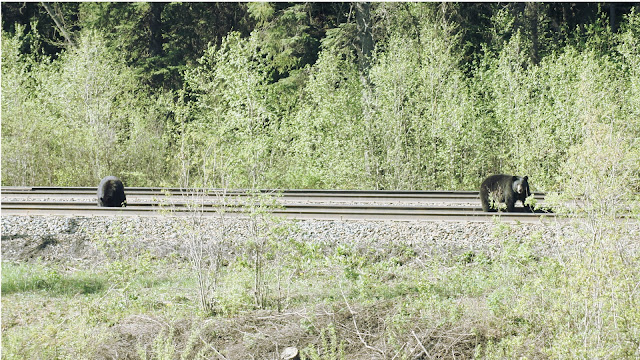 We thought that was to be the wildlife highlight, but it got better.

We stopped off at Field where I got my "money shot" - the one good shot that makes a DVD sell. This small town is just 360 degree scenery.


We had an early lunch then departed for the Kicking Horse Pass and the Spiral Tunnels. I was sort of disappointed with these as there are so many trees blocking the view. All you can see is a couple of tunnel portals and a bit of track way off in the distance. For all the hype surrounding this place, you'd think they'd make the effort to make this place visible.

The next stop was Lake Louise where we called into the old station which is now a restaurant. I got two shots here which were OK. Gophers were in abundance and one of them took a disliking to me, sounding a chirpy warning to his mates that some idiot with a video camera was hanging around. The restaurant owner said that they're not really a pest, except when they make dens in your lawn - then the bears come along and make a crater digging them up looking for a feed....bears ???

We departed Lake Louise for Banff and along the way I spotted a dark shape behind the wild animal fence and pulled over - it was a Grizzly Bear. Massive animal - made the black bears look lovely. As stated, he was behind the fence that lines both sides of the highway. About every 3-4 k's there is a bridge that allows the wild animals to cross the road.

Once at Banff, we checked in and headed out to look for trains. Signals were off, so we took a cruise around town to see the sights: a huge hotel, a waterfall, two large Elk (Wapiti) happily grazing in the city centre...all the usual things. Dinner and a return to the station, still nothing.

Another cruise around town and time to knock it on the head.

Internet is dodgy here - it took 20 minutes just to upload these 3 pics. Three bus loads of Chinese tourists staying in the same hotel using up all the internet data.

Although we'd booked at the Spring Grove Hotel, we were transferred to the Voyager Inn next door. The two places are run by the same people and they fill up the Voyager first and use the Spring Grove as their overflow. I half expected something like this to happen so it wasn't a drama.

Only four trains filmed, although a lot more were seen/heard - about 6 or 7 passed through at about 4 am.

Tomorrow we'll try again at Banff before heading to Calgary, which is a short drive again.
Posted by Erin at 21:07